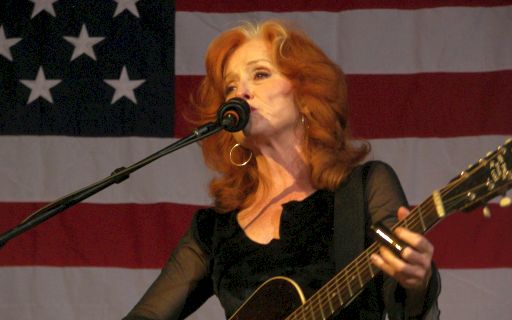 Born on this day in 1949 – Crossover blues singer, songwriter, slide guitarist Bonnie Raitt, who scored a US No.1 album with ‘Nick Of Time’.

During the 1970s, Raitt released a series of roots-influenced albums that incorporated elements of blues, rock, folk and country. In 1989, after several years of critical acclaim but little commercial success, she had a major hit with the album Nick of Time. The following two albums, Luck of the Draw (1991) and Longing in Their Hearts (1994), were also multimillion sellers, generating several hit singles, including “Something to Talk About”, “Love Sneakin’ Up on You”, and the ballad “I Can’t Make You Love Me” (with Bruce Hornsby on piano).

Raitt has received 10 Grammy Awards. She is listed as number 50 in Rolling Stone’s list of the “100 Greatest Singers of All Time” and number 89 on the magazine’s list of the “100 Greatest Guitarists of All Time”. Australian Country Music Artist Graeme Connors has said, “Bonnie Raitt does something with a lyric no one else can do; she bends it and twists it right into your heart.”