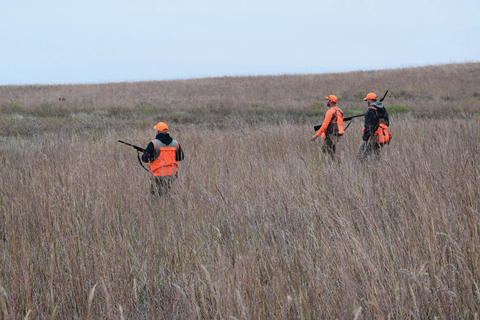 DES MOINES — Iowa’s 2022 pheasant season is expected to be another good one when more than 60,000 plus blaze orange clad hunters take to the fields on Oct. 29. And based on the results of the August pheasant survey, hunters can afford to be optimistic.

“Our bird numbers are similar to last year so that should make some folks pretty happy,” said Todd Bogenschutz, upland wildlife research biologist with the Iowa Department of Natural Resources. “I think we’re set up for a good hunting year for pheasants, especially in northwest, west central and north central regions. Central too. Quail is also looking good in southwest and south-central Iowa.”

The annual August roadside survey found Iowa’s statewide pheasant population to be essentially unchanged from 2021 at slightly under 20 birds per 30-mile route. Iowa’s pheasant counts mirrored what was happening across much of the pheasant belt. North Dakota and Nebraska were essentially status quo – like Iowa, Minnesota was slightly higher and Kansas was down due to the drought. South Dakota doesn’t conduct population surveys.

Based on the survey results, Iowa hunters can expect to harvest 300,000 to 400,000 roosters this year, which is similar to last year, when the harvest was the highest in more than a decade.

The pheasant harvest is heavily dependent on hunter numbers and the past two years had the highest number of pheasant hunters since 2009. An estimated 63,000 hunters participated in 2021, a slight increase over 2020, and based on the number of phone calls Bogenschutz is receiving, the interest from nonresidents continues to rise.

“I’ve gotten calls from hunters in Tennessee, Alabama, Michigan, New York – all interested in coming out to pheasant hunt,” he said.

While bird counts were not as high as the top regions, the pheasant populations have improved in the east central and southeast regions.

Something to note, he said, is that portions of western and northwestern Iowa impacted by the drought were opened to haying CRP and while the haying was not likely as wide spread as last year, it would still be advised for hunters to scout the area they plan to hunt prior to the season.

Iowa’s pheasant season is Oct. 29-Jan. 10, 2023, shooting hours are 8 a.m. to 4:30 p.m. The daily bag limit is three rooster pheasants with a possession limit of 12. Hunters must have a valid hunting license and habitat fee.

If hunting on public land that requires nontoxic shot, hunters are encouraged to plan ahead to pick up shells. While the supply isn’t as tight as it was for dove loads, it still isn’t great.