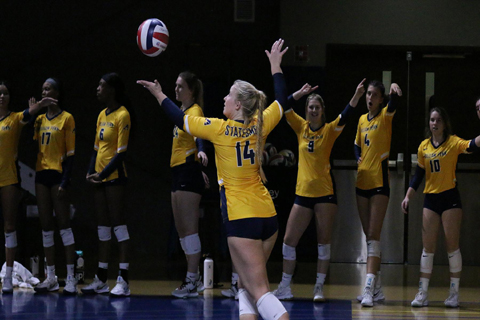 ELGIN — The William Penn women’s volleyball team dominated its first set of the 2022 season, but unfortunately could not maintain that momentum as it dropped two non-conference matches Saturday.

The navy and gold hit .263 in the opening set against the Trojans, while TU was an abysmal -.385 (2 kills, 12 errors).  After giving up the first point, the Statesmen reeled off four in a row and eight of the next nine and were never threatened.

The second go-round was a tight one for much of the way, including William Penn drawing even at 17-17.  The Trojans, however, scored five straight and cruised to knot the contest at one set apiece.

Looking to recapture its swagger, WPU picked up the first four points of the third set, but then witnessed Taylor go on a 9-4 run and walk away for a 2-1 edge.

Similar to the second set, the Statesmen were again within striking distance in the fourth, narrowing the deficit to one at 16-15.  Unfortunately, they would get no closer as Taylor finished the match with three consecutive sets.

Cooling off after the hot start, WPU was outhit .271-.231; the squad also did not fare as well at the service line with just three aces, compared to seven for the Trojans.

New transfer Andressa Borges (So., Sao Paulo, Brazil, Sports Management) had a great debut with a squad-best 13 kills on a .407 attack clip.  She was also a force at the defensive net with five solo blocks.

Alyvia Johnson (So., Owatonna, Minn., Elementary Education) was next with five kills, but had an even bigger impact on defense with a team-high 11 digs.

The first two points of the match went in favor of William Penn, but then it went south as the Eagles grabbed the early advantage.  A back-and-forth second set followed with the navy and gold tying things up at 23-23, only to see JU get the final two points.

Sitting in the rearview for the first half of the third set, the Statesmen finally went on top at 14-13.  The lead was short-lived, though, as the Eagles went on a 7-1 run to finish the sweep.

Borges and Hungate were again at the top of the navy and gold’s kill leaderboard with seven winners apiece.  Corrin Lepper (Sr., Jefferson City, Mo.) was next with six kills at a .400 attack percentage.

Bailey started the day’s second match at setter and helped on 19 Statesmen points in addition to serving up three aces, while Caidince Cleveland (So., Bettendorf, Iowa, General Accounting) managed 16 digs to guide the defense.

Lepper and Borges were both a part of two blocks in the setback.