STATE SEES INCREASE IN EXCESSIVE SPEED ON ROADWAYS DURING PANDEMIC

RADIO IOWA – Several state agencies are getting together to try and put the brakes on some of the drivers in the state who have been taking advantage of reduced traffic on the roadways to push the speed limit.

State Patrol spokesman Sergeant Alex Dinkla says, “The big norm seems to be now since the COVID hit is that motorists feel that it is okay to drive well in excess of the speed limit. And so we want to make sure that we slow motorists down — because our ultimate goal is we want people to get to their destination safely — and to save lives.”

He says this is more than drivers going five or six miles above the limit. “People traveling 25 miles-an-hour or more over the speed limit as well as 100 miles-an-hour or more over the speed limit. Each month since around March, we have seen those numbers just increase,” he says. Dinkla says there may’ve been less traffic on the roadways — but there is still a danger with those high speeds. 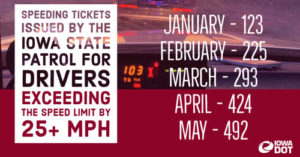 “When motorists travel that fast, they are not going to have a good reaction time should a motorist or even a deer pop out in front of them. We’ve seen the number of 100-mile-and-hour or more citations increased to over 100 tickets each month since March of motorists getting ticketed for traveling over the speed limit.

” Dinkla says the drivers thought they were out there alone. “One of the number one reasons we were given from a lot of motorists when they were stopped during the pandemic was — they plain and simple thought law enforcement was not out there actively stopping cars and initiating traffic stops,” according to Dinkla. “Quite the contrary, because our officers, they are not able to work from home. They have to be out enforcing these infractions.”

The Iowa Department of Public Safety, Iowa State Patrol, the Governor’s Traffic Safety Bureau, and the Iowa Department of Transportation are collaborating on tactics to help bring awareness to the issue, and encourage personal responsibility in keeping Iowa’s roadways safe in a public awareness campaign. Dinkla says finding our your loved one was involved in a fatal accident is not something you want to hear.

“Those fatality accidents also take a toll on officers and first responders that have to respond to those and see the things that they see,” Dinkla says. He says officers will be on the roadways and looking for drivers who feel the need for excessive speed.
“Not only for the Fourth of July but through the month of July, we are going to be actively out there trying to reduce what people think is the new norm and that they are able to speed,” according to Dinkla. “We want to make sure that we get that message out there. It is not okay to drive well in excess of the speed limit. The speed limit is out there for your safety as well as other motorists’ safety.”

The data shows the most common speeding violators are males between the ages of 14 and 29 years of age. The highest rate of noncompliance with posted speed limits occurred on Saturday afternoons. The Patrol’s data also revealed that 60% of the violators are out-of-state drivers.